What is the structure of the diamond?

Diamon is an allotrope of carbon it is solid in nature. A solid is a state of matter where the molecules are in close arrangement with one another has a specific structure. Besides diamonds, there are other allotropes of carbon namely graphite, fullerenes, and charcoal. Diamond is one of the hardest forms of carbon and mainly used for making beautiful gemstones. The structure of the diamond is tetrahedral with each of the carbon atoms is joined to the other four carbon atoms in a regular tetrahedral pattern.

How to draw the structure of the diamond? 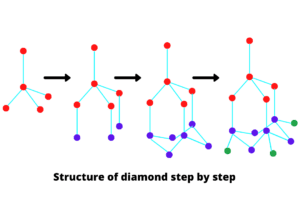 Each carbon atom of diamond has four covalent bonds. These bonds are very strong. It takes high temperatures to provide the energy needed to break them down. For this reason, diamonds have a very high melting point. All the external electrons of each carbon atom are involved in covalent bonding.

How does the crystalline structure of graphite compare with that of a diamond?

In graphite, the carbon atom is bonded to three carbon atoms only leaving one free valence. And giving a three-dimensional arrangement of hexagonal rings. So graphite and diamond both allotropes of carbon, there are some comparisons in their crystalline structure (1) & (4).

What is the crystalline structure of the diamond?

Crystal is a special form of solid. Particles of solids which are equipped with a specific rule are called crystalline. The molecules of this substance acquire a precise three-dimensional form. This type of substance is commonly called a crystalline substance. This particular type of microscopic arrangement of matter is called the crystalline structure. Diamond is a solid substance.

Diamond crystals can be arranged in a variety of shapes. The crystals of a diamond are formed like cubes, dodecahedra, and a combination of these shapes. The crystal of diamond may not be completely smooth. But the crystal structure is triangular prisms. A diamond is a crystal of tetrahedrally bonded carbon atoms in a covalent lattice (spᶾ) that forms crystals in diamond which is an alternate of the face-centered cubic structure. Each carbon atom is parallel to the other four carbon atoms (3) & (5). 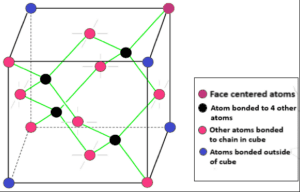