A volcano is a special type of mountain through which heated and molten rocks, ash, and gas comes out from underground. This is a geographical process. The precise definition of volcano according to P.G. Worcester, “A volcano is a vent or opening, usually circular or nearly circular in form, through which heated materials consisting of gasses, water, liquid lava and fragments of rocks are ejected from the lightly heated interior to the surface of the earth”. And as per  A. Holmes and D. L. Holmes,” A volcano is essentially a fissure or vent, communicating with the interior, from which flows of lava, fountains of incandescent spray or explosive bursts of gasses and volcanic ashes erupt at the surface”. The following article will elaborate on types of volcano based on their activity and shape.

Some of the examples of active volcanos are

1. Volcanoes are usually conical in shape.

2. These have one or more crater.

3. Volcanoes may include lava, rock fragments, ash, and gas.

4. The lava accumulates on the surface and clumps up. And volcanoes are created.

5. On top of the volcanoes has crater.

6. The volcano contains one or more craters.

7. Lava emitted from the volcano can be both acidic and alkaline.

How Many Active Major Volcanoes Are There In World?

There are about 1,500 potentially active volcanoes worldwide, excluding continuous belts of volcanoes under the sea at dispersal centers such as the Mid-Atlantic Ridge. Of these, the major volcano number is about 356.  Of these 1,500 volcanoes, about 500 have erupted in historical time.

The eruption is an endogenous process. This process results in the formation of volcanoes. These volcanoes are divided into several classes.

Types of volcano according to the structure and shape

The volcanoes are divided into four parts according to the shape and structure. These four types of volcano are as follows

1. This type of volcanic cone slope is equal and steep.

3. Caldera is created in this type of volcano.

Such types of volcanos are formed by the deposition of pyroclasts around the cracks or holes in the surface. 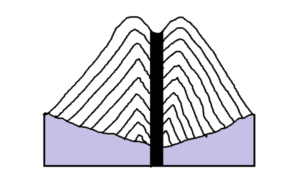 1. This volcano is much cone-shaped.

Liquid lava comes out slowly without any explosion in the surface hole. And around the hole, the lava extends far and wide. And this kind of volcano is created.

2. This type of volcano is created without exploding in the hole of the surface.

The explosion creates a hole on the surface. The lava is stored around the holes. And low create volcano is formed.  This is called Explosion vent or pit volcano. 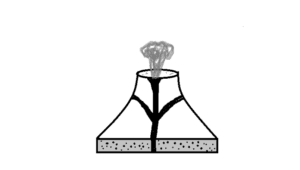 1. The eruption caused a hole in this volcano.

2. The low crater ring is formed in this volcano.

3. This volcano has a very low altitude.

4. There are volcanic lakes is formed in the crater of the volcano.

Types of Volcano according to the continuation or activation

The volcanoes are divided into three types according to their continuation or activation. Therefore different types of volcano are as follows

Such kind of active volcanos constantly emits lava and gases. An example is Vesuvius in Italy.

From this volcano, there are occasional eruptions. An example is Stromboli in Italy.

This volcano is currently inactive. But there is a possibility of an eruption from this volcano in the future. An example is Mount Fuji in Japan.

These volcanos are inactive volcano. Scientists have confirmed that eruption is never possible from this volcano. One such example of an extinct volcano is Mount Popo in Myanmar.

How many active volcanoes on Hawaii Island?

Hawaiian Island is made up of a hot spot of magma located beneath the surface of the earth throughout history. The magma is bubbling and forms on its own until it is tall enough to break the surface of the ocean and form the island. As the Pacific tectonic plate moves slowly, a new island begins to form beneath the ocean floor behind the ends. An active volcano is one that has caused at least one explosion in the last 10,000 years. If the volcano is not active and its last eruption occurred more than 10,000 years ago, it is defined as extinct.

The five main volcanoes in Hawaii are considered active. Four of these active volcanoes are located on the big island. These include Kilauea, Mauna Loa, Mauna Kea, and Hualalai. The other is located on Maui and it is Haleakala Mountain.  There is also a sixth active volcano called Loihi, which is still submerged underwater on the shores of the big island near Kilauea.

Kilauea is one of the world’s most active volcano. It is located on the Big Island. This volcano has huge eruptions during the spring of 2018.

Mauna Loa has exploded 15 times in the last 120 years on the Big Island. Scientists say that this volcano is due to eruptions. As a total mass, it is the largest volcano in the world but it is not the longest volcano.

Mauna Kea is the longest volcano in the world when measured from the bottom of the ocean to the Big Island. It is currently dormant, but in the future, scientists believe it will erupt again. This volcano was last spread over 4,000 years ago.

Hualalai has erupted in 1801 but it has had other rumblings since that last eruption on Big Island. During 1920, the magma movement between volcanoes caused great earthquakes. The volcano has been closely monitored since 1980 and since then there has been no earthquake but it is still considered an active volcano.

Haleakala has not exploded since the 17th century but is still considered active. This popular volcano is located in Maui. Scientists believed that a future explosion should be expected but they are not seeing any signs of it happening any time soon.

Loihi is Hawaii’s other active volcano. But it is not very well known yet. At this time it is still submerged under sea level off the Shore of Big Island but it is currently erupting underwater.