Instantaneous Angular Velocity is a very important fundamental topic that makes the basics of circular and rotational motion in mechanics.

An object is considered a moving object when

The symbol of angular velocity is ω(Omega) or sometimes Ω(ohm).

Well, Instantaneous Angular Velocity is a type of angular velocity.

“Rate of change of angular displacement of a particle performing circular motion is called angular velocity.”

ω is Angular velocity,  is angular displacement and t is time in seconds.

To understand this, let us take an example

Consider, a ball is rotating around a point, if it is rotating some angular displacement for 2 (t₁= 1s to t₂= 3s) seconds, here the time interval will be 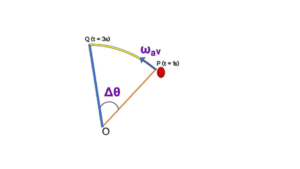 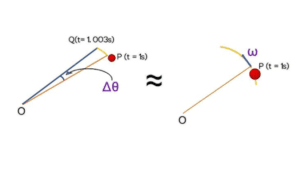 or time interval is very small as it is going to be zero (∆t ≈ 0) just like it is approaching zero, that means it is referring to a particular time that is 1 second in this case,

So the definition of Instantaneous Angular velocity is

The direction of Instantaneous Angular Velocity

So to find the direction of the object we use the Right-hand Thumb Rule.

Let us consider some real-life examples.

1. Rotation of wheels of a car

When the car moves on a road its wheels rotate along the axis of rotation that is positioned at the center of the wheel and perpendicular to it.

In the case of carnival, Instantaneous angular velocity is used to measure the centripetal force at an instant of time, whose value increases beyond a maximum value, which increases the risk of breaking the basket and this may cause an accident. This formula is used to measure it,

3.  Turning of a bike on a curved road

A bike is turning on a curved road then the bike will have angular velocity while turning.

Instantaneous angular velocity is used to determine the maximum speed a bike can travel on a curved road. So that the value of the centripetal force on the bike does not exceed the maximum value of the fall and avoid accidents.

In previous segments, we have already known about angular velocity and its definition which was “The  Rate of change of angular displacement of a particle performing circular motion is called angular velocity.”

But how was this definition made and how are we able to write that formula?

Here we will learn how were these formulas determined.

Let me explain to you,

Suppose a particle P is moving in a circle of radius r (fig). Let O be the center of the circle. Let O be the origin and OX the X- axis. The particle P at a given instant may be described by the angle θ between OP and OX. We call θ the angular position of the particle.

As the particles are moves on the circle, their angular position θ changes. Suppose the particle goes to the nearby point P’ in time ∆t so that θ increases to θ + ∆θ. 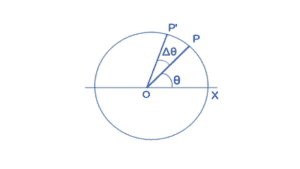 1. How to find instantaneous angular velocity?

Ans. By differentiating the function with respect to time using the formula

2. What is instantaneous angular velocity?

Ans. Initially, the hoop is rotating on a rough surface, which means it is rotating with slipping, so friction will act on that point that is touching the surface

After that, it stops slipping hence, called pure rolling where 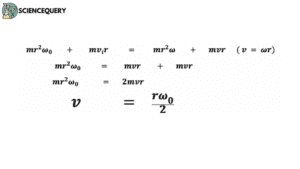 4. If the angular displacement of a rod as a function of time Is θ = 2t²+3t.What is the instantaneous angular velocity in (rad/s) of the rod at t = 7s? 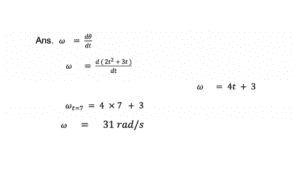 5. Why is instantaneous angular velocity important?

Ans. It is a very important topic to learn in physics, cause it helps us to determine how fast something is spinning at that instant in time.

Used to calculate the chances of an accident. By using its limited value, We can avoid accidents involving damaging or breaking of any rotating object, as we have studied in the earlier examples in the case of carnival and turning of a bike.