Weather is consist of air temperature, pressure, humidity, precipitation, and wind conditions of a region. Rainfall is a very important component of weather. There are three types of rainfall. These are convectional rainfall, orographic rainfall or relief rainfall, and cyclonic or frontal rainfall. Below is a discussion of the different types of rainfall.

Rainfall is a condition of the weather of a region that depends on various elements. Water vapor cools and condenses in the upper sky to form clouds. These clouds contain numerous water particles and ice particles. These tiny water and ice particles combine to form larger water particles. Normally when a cloud floats in the sky, it condenses and falls to the earth’s surface under the force of gravity in the form of droplets, it is called rainfall (1) & (4).

1. Rainfall is a very important component of weather.

2. It is the key element in the earth’s water cycle.

3. These play a vital role in all life on earth.

4. This is the main way water from the sky descends to the earth, where it fills lakes and rivers, recharges underground aquifers, and provides drinking water for plants and animals.

5. Rainfall is the main source of energy that drives atmospheric circulation.

6. It plays an important role in crop production in agriculture.

7. Without rain, the soil can dry out and plants can die. When rain is below normal for weeks, months, or years, stream and river flow decrease, water levels in lakes and reservoirs drop, and water depths in wells increase.

8. Groundwater is recharged by rainfall hence its importance is immense.

There are three types of rainfall. These are 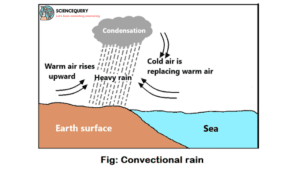 As the surface air warms, it becomes saturated with water vapor and becomes lighter, and rises by the convectional process. At this time, the water vapor coming into contact with the cold air first turns into clouds and then rain and descends straight down. This rainfall is called convection rainfall (2). 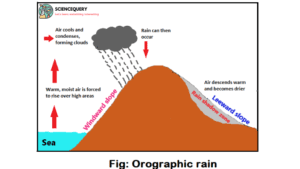 Moist air full of water vapor is blocked by a high mountain and rises over the ridge. The rain that condenses on the leeward slopes of mountains when it comes in contact with the cold air above is called orographic rain. Mountains play an important role in generating this type of rainfall.

1. Orographic rain occurs due to obstruction in the mountains.

2. It occurs from cumulus clouds.

4. It is also known as relief rainfall.

5. This type of rainfall occurs on the windward slope of the mountain.

6. One of the main features of orographic rain is the contrast of rain.

7. In orographic rain, when water vapor is trapped in a mountain and rises above a mountain, then this air mass condenses before it reaches the top of the mountain, causing heavy rainfall.

8. Orographic rain does not occur on the lee side of the mountain.

9. It occurs in any season.

10. This rainfall lasts up to a certain height and then decreases gradually.

As the water vapor air flows over the surface, it is blocked by the mountain and rises up the mountain, and expands and cools. As a result, water vapor condenses and causes heavy rainfall on the lee side of the mountain.

That is why the rainfall is very less on the windward side of the mountain and adjacent areas. This region with low rainfall is called the rain shadow zone (1). 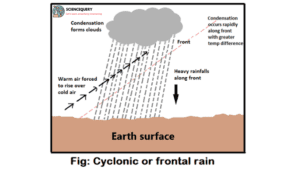 Warm and moist air containing water vapor is drawn upward by the low pressure at the center of the cyclone. As a result, the air full of water vapor rises to the top, cools, and condenses to form precipitation, called cyclonic or frontal rainfall (1).

1. Most rainfall originates in which types of clouds?

Most rainfall originates in cumulonimbus clouds.

2. What are the different types of rainfall?

Convectional rain, orographic rain, and cyclonic rain are the three types of rainfall.

Splash erosion is the least severe.

4. What types of soil allow the greatest amount of rainfall to soak in?

Sandy soil allows the greatest amount of rainfall to soak in.

5. How does annual rainfall in a grassland limit the types of plants that grow there?

Plants in grassland have long, narrow leaves that don’t need much water. Extensive roots that spread wide and deep, soft steam, and can even become dormant or stop growing leaves, seeds, and roots until spring to survive in their harsh environment.