3. It is an aldose sugar because ribulose 5-phosphate contains an aldehyde group (-CHO).

4. The chemical formula of this pentose sugar is C₅H₁₁O₈

5. This pentose sugar is a precursor for purine, pyrimidine, and aromatic amino acid biosynthesis.

6. Phosphoribosyl pyrophosphate is formed when it reacts with ATP.

7. It may also be the acceptor, in which case octulose 8-phosphate may be formed.

8. This enzyme forms glyceraldehyde 3-phosphate in the pentose phosphate pathway which is a triose phosphate.

9. It is needed for the synthesis of nucleotides and nucleic acids (3).

1. Acts as an enzyme in both prokaryotic and eukaryotic metabolic pathways.

2. It is used to form the main component of nucleotide coenzymes.

3. The first carbon of the ribose 5-phosphate formed a double bond.

4. It forms an aldose that helps to bind carbon dioxide in the Calvin cycle.

6. Histidine is an amino acid. It is not synthesized in the human body. Ribose 5-phosphate helps in the biosynthesis of histidine.

7. It can be converted to adenosine diphosphate ribose.

9. In addition to histidine, ribose 5-phosphate and its derivatives act as precursors to many biomolecules, including DNA, RNA, ATP, coenzyme A, Flavin adenine dinucleotide (3) & (2).

It is a pentose sugar and is consists of five-carbon sugars. There is a phosphate group present in this type of sugar. One phosphate group and five carbon atoms combined together to form the above.

The chemical formula of this type of carbohydrate is C₅H₁₁O₈P. In addition to the five-carbon molecules and a phosphate group, there are 11 atoms of hydrogen and 8 atoms of oxygen.

This product forms a furanose or open chain. Furanose means a chemical structure of carbohydrates. A furanose consists of four carbon and one oxygen atom with a five-membered ring system. The furanose form is known as ribose 5-phosphoric acid (1).

It is generated in the pentose phosphate metabolic pathway. This pentose sugar is an important source for the production of NADPH for reductive biosynthesis. It has two phases, the oxidative and non-oxidative phases. 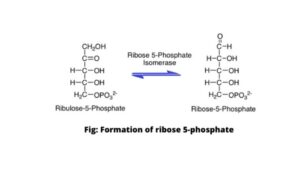 There are two phases in this metabolic pathway. One phase is linked with another.

In this way, this is produced in the pentose phosphate pathway. And various compounds are formed from this pentose sugar (1) & (2).

1. What is the purpose of producing ribose-5-phosphate in the pentose phosphate pathway?

The primary purpose of producing this in the pentose phosphate pathway is ribose 5-phosphate is a pentose sugar that is used to make Deoxyribonucleic acid and Ribonucleic acid.

2. Which of the following requires large amounts of both ribose-5-phosphate and NADPH?

During cell growth, large amounts of both ribose-5-phosphate and NADPH are needed for the biosynthesis of nucleotides (RNA and DNA) and the synthesis of fatty acids.

3. What is ribose 5 phosphate used for?

4. Where does ribose 5 phosphate come from?