From the end of the seventeen century onwards, various texts began to publish research discussions on ecological relations. In 1877 scientist Karl Mobius, and in 1887 S. A. Forbes, wrote a number of scientific articles on the ecological relations of a particular region. Scientists start a new way of analyzing that relationship from an overall perspective. Later in 1935, A. G. Tansley first used the term ecosystem. At present, the concept of an ecosystem is a widely used subject in ecology (2).

An ecosystem is a natural unit consisting of organic, inorganic matter, and various organisms where different form a way of life by interacting with each other and their surrounding organic and inorganic elements.

According to A. G. Tansley, ‘a functioning interacting system composed of one or more living organisms and their effective environment both physical and biological’ (2). 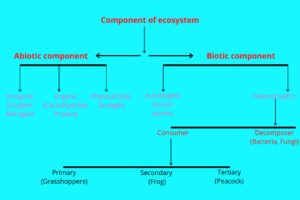 The components of the ecosystem are mainly divided into two parts.

1. The ecosystem has a specific area.

2. Ecosystem is observed in a temporal unit or measure.

3. Supply and production of energy and matter in the atmosphere is active at all times.

4. Only source of energy in the ecosystem is sunlight.

5. Size of an ecosystem can range from very small to large.

6. The ecosystem has a well-organized specific structure.

7. A permanent equilibrium state can be observed between the different components of the system (1) & (2). 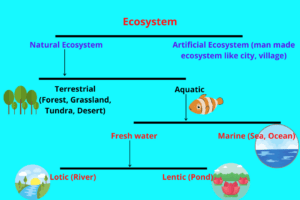 Soil, air, minerals, etc. are the abiotic elements of the forest ecosystem. And biotic ingredients include producers, consumers, and decomposers. Forest ecosystems are divided into several categories based on their climate. These are tropical forests, temperate forests, and boreal or taiga forests. These ecosystems contain more diverse flora and fauna than any other ecosystem in the world. In this warm, humid environment the trees grow taller and the leaves are denser. The species lives everywhere up to the canopy at the bottom of the forest.

In temperate regions, forest ecosystems can be thin, conical, with some trees dropping each fruit on their leaves. The forest ecosystem is an important terrestrial environment that provides shelter to thousands of plant and animal species. Forest green plants collect inorganic material and make food with the help of solar energy. The primary consumer or the herbivores take that food directly. Secondary consumers take primary consumers and tertiary consumers take secondary consumers as food. After the death of the producer and the consumer, the abiotic material is again dissociated by the decomposer and merged into the environment. As a result, there is a balance between the elements of the forest ecosystem  (1) & (2).

Desert ecosystems are either vegetative or barren in nature. Every desert receives some amount of rain a year, but it is not distributed evenly everywhere. Desert can be divided into two categories- hot deserts and cold deserts. Examples of warm deserts are the Sahara of North Africa, the Kalahari of South Africa, the Thar of India, the desert of Mexico, the Atacama of South America, the Australian desert, California, and the Arizona desert. On the other hand, the deserts of Iran and Turkey, the Gabi desert of Mongolia, and a few deserts in Argentina are examples of temperate cold deserts.

The main features of desert climate are low rainfall (less than 25 cm). Most of this rainfall occurs in just 50 days of the year. Other clear climate features of the desert include clear skies, hot daytime, and very cold nights. These areas are sparse plants, rocky soils, and covered with salt and sand. However depending on the availability of water, dates, barley, cotton, millet, etc. are cultivated in different places.

Desert plants are usually short-lived in nature. Their base is located at a depth of 1 m from the surface. As a result, they can easily collect rainwater. Their leaves are in many cases converted to scales or spines to reduce water consumption through evaporation. The stems of desert plants are green and succulent, so they are capable of photosynthesis. The roots of the desert plants are long enough and extend to the groundwater. The initial productivity of the desert ecosystem is very low. Locusts, rats, camels, etc. are notable among the consumers in the desert ecosystem  (1) & (2).

Grasslands are mainly formed in temperate regions. Grassland ecosystems cover 20% of the earth’s surface. These ecosystems are affected by the organisms and plants that live there over time.

The grasslands are known by different names in different parts of the world. Such as prairies in North America, steppes in Europe and Asia, pampas in South America, veldt in South Africa, and downs in Australia. In India, they are mainly found in the Himalayan region.

The word ‘tundra’ means a wetland plane. The arctic tundra region is predominantly plant-less and barren in nature. However grass, sage, lichen, etc. can be seen in some places. There are also rocky or submerged places somewhere. The soil is mixed with snow and frozen in depth.

The climatic features of this region are low temperature (daytime temperature less than 10°c in the warmest month), low precipitation, and permanent snow cover. The tundra region is divided into two parts namely the arctic tundra and the alpine tundra.

The arctic tundra region is called the real tundra. Different species of grasses and sedges grow in this ecosystem. Also found are bilberry, huckleberry, moss, lichen, etc. The overall productivity in this ecosystem is low. Among the herbivores are mosquitoes, flies, insects, migratory birds, etc. Among the consumers are polar rabbits, polar goats, caribou, lemmings, etc. are the main ones. Although the natural features of the alpine tundra region are similar to those of the polar tundra, drainage is relatively convenient in this region. The alpine tundra region is not evergreen. Plant growth is also longer here  (1) & (2).

This ecosystem is formed in water. In this type of ecosystem, the interrelationship between different types of aquatic animals, plants, and inorganic matter can be observed. Aquatic ecosystems cover about 70% of the earth’s surface. These ecosystems play an important role in the cycle rotation of various chemical elements. There are two types of this ecosystem. These are-

Flowing water ecosystems forms lotic ecosystems. The river is the main example of the lotic ecosystem. These types of ecosystems are habitat to species of insects such as beetles, stoneflies, mayflies, and different types of fishes like trout, eel, etc. Also seen in various mammals such as dolphins  (1) & (2).

The marine ecosystem is the largest ecosystem in the world. Different species of organisms live in this ecosystem. The total area of all oceans is about 15 times that of land. The various minerals that make up the crust rock are eroded and dissolved in ocean water. The presence of sodium chloride is the highest among these minerals.