The –COOH and -NH₂ groups are ionized groups. These two groups of amino acids act as proton donors or proton acceptors. For this reason, amino acids are called ampholytes. At a specific pH, the amino acid carries both charges (positive and negative) and exists as a zwitterion.

The word zwitterion comes from the German word “zwitter”, which means hybrid. So it is also known as hybrid ions.

A molecule or ion that individually produces positive and negative charged groups. This molecule is called a zwitterion. It is mostly electrically neutral. They are also known as inner salt, dipolar ions. All protein molecules consist of amino acids which carry –COOH and -NH₂ groups in their side chains.

These groups contain both acidic and basic groups. They can react with both acids and alkaline to form salts. The carboxyl group is acidic. It can donate a proton by dissociation. And the amino group is basic and can accept a proton. When amino groups and carboxyl groups are ionized, the amino acids are known as zwitterion (1) & (2).

The amino acid exists as zwitterion when they are ionized. This theory is known as zwitterion theory. The ions exist as double-charged molecules and are electrically neutral. 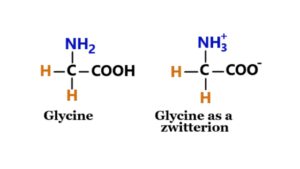 It is an amino acid having a single hydrogen atom in its side chain. Glycine is a stable amino acid. Its formula is NH2-CH2-COOH. They are used to create proteins in the body (6). 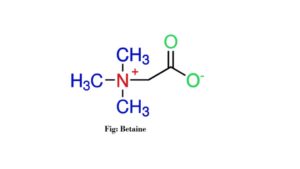 Betaine is an amino acid derivative. Its chemical formula is C5H11NO2. This ion is soluble in water. Its melting point is 180°C. Betaine is a methylated group of amino acids. It is a special type of zwitterion. The ion is also known as trimethylglycine. It is used for the treatment of homocystinuria (2). 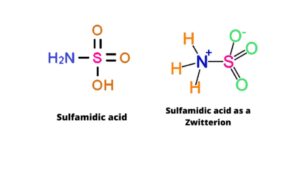 Sulfamidic acid is a colorless compound and is soluble in water. The molar mass of Sulfamidic acid is 97.10 gm/mol. Its chemical formula is H3NSO3. This acid is mainly used for removing rust limescale. It is also used in electroplating, cleaning metal, and stabilizing chlorine. Sulfamidic acid consists of a single sulfur atom by a single bond to hydroxyl and amino group and by a double bond to two oxygen atoms (5). 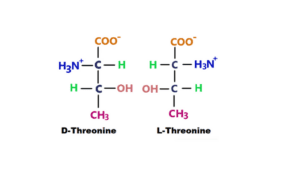 Threonine contains an amino group, a carboxyl group, and a side chain with a hydroxyl group. It is used in the biosynthesis of proteins. This ion is synthesized from E. coli bacteria. The chemical formula of threonine is C4H9NO3. Its molar mass is 119.12 gm/mol. D-threonine and L-Threonine both are active forms of threonine. They play an important role in the metabolism of saccharomyces cerevisiae (4). 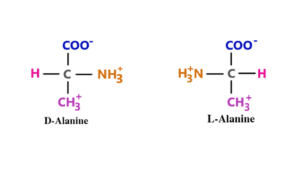 Alanine is the common residue for protein synthesis. Its chemical formula is C3H7NO2. This ion is an essential source of strength for muscles and nerve systems. It is naturally formed in the human body. L-Alanine transfers a proton from the carboxyl group to the amino group. Both groups are attached to the central carbon atom of alanine. And the carbon atom carries a methyl group (4).

1. What is a zwitterion?

A zwitterion is an ion or molecule with a positive and a negative electrical charge. An amino acid contains acidic and alkaline groups. These groups both can donate and accept protein.

2. Which of the following is a zwitterion?

Alanine is a zwitterion. When Alanine is dissolved in an aqueous solution, then zwitterion is formed.

3. Which structure represents a zwitterion?

Amino acid structures represent a zwitterion. They are made up of an amino group and a carboxyl group. The amino group contains a positive charge and the carboxyl group contains a negative charge. Twenty different amino acids are found in proteins. They share the structure of zwitterion. Here R represents one of the 20 possible side chains on an amino acid.