Plants adapt accordingly in different regions of the world due to changes in climate and natural diversity. They change and maintain their existence through the process of reproduction. Due to continuous adaption, there is a series of continuous and orderly changes in a plant community can be observed. This sequential change of plants is known as Plant succession.

The preparation of succession begins with the change in soil composition and conditions as the soil has accumulated over the ages to create land. In the next stage, different organic matter mixes with the soil and changes the properties of the soil.

According to Clements, “Succession is a natural process by which the same locality becomes successively colonized by different groups or communities of plants” (1) & (3).

The basic principle of plant succession

Plant successions are based on the following basic principles.

The methods by which plant successions occur are-

The succession of a plant species in an ecosystem is controlled by a number of factors.

The plant species in an area are affected by the sun rays, atmospheric temperature, humidity, soil type, etc., and accelerates the plant succession.

The type of land in an area, the slope of the land, the relative height affect the plant succession of the area.

The fire factor is basically a forest fire. These include both naturally occurring forest fires and man-made forest fires. Such fires completely destroy a plant community. Over time, new plant species in the area re-emerged. That is, plant succession occurs.

The role of biological factors in plant succession is very significant. Although different organisms influence this succession, human influence is the most important. Because only humans can eradicate existing plant species in a large area in a short period of time and create new species.

Other factors that play a significant role in plant succession are landslides, volcanic activities, earthquakes, ice age, and even the current global warming (1) & (3).

There are various types of plant succession. These are discussed below.

After the first establishment of a plant species in a region, its gradual removal through various adverse conditions is organized. If such events are no longer organized there, then it is called primary succession.

At this stage, the plant has to be located in a very adverse environment. The SERE that is related to the primary succession is called Pre-SERE.

Primary succession is seen in many places in the equatorial region and in the Krakatoa volcano island. 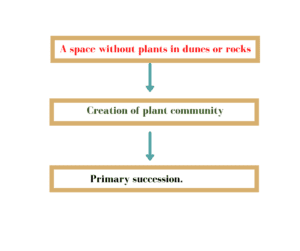 The area in which the plant community used to live but now the plant habitat has been completely destroyed due to natural and man-made causes. The process by which new plant communities are formed there is called secondary succession.

This phase is also called sub-SERE. The soil is fertile in the case of secondary succession. As a result, the secondary phase takes less time to complete.

In the hilly region of north-eastern India, where shifting cultivation or jhum cultivation is predominant, such secondary succession is more observed.

This type of evolution is called autogenic succession. The living elements that play an important role in this succession are the detritus food chain, nitrogen fixation, absorption of water and nutrients, photosynthesis of plants, etc.

When a non-living or external factor replaces a community and establishes a new community, this process is called allogenic succession.

Due to various natural causes such as floods, droughts, fires, meteors, earthquakes, volcanic eruptions, etc. a community is completely destroyed and replaced by a new community.

Autotrophic succession is the process of continuous growth and development of producers or green plants in a region.

This succession begins in the inorganic environment and in this case, the predominance of photosynthetic autotrophic plants is observed. In this succession, the net production and total biomass of a region increases.

In areas where different species of animals and plants, such as bacteria, fungi, and green plants form a succession together, this is called the heterotrophic succession.

Fungi and microorganisms form this succession in contaminated sewage water, perishable wood, dun, etc. The presence of green plants is very low so the rate of respiration is higher than that of photosynthesis in this succession.

The process of succession of the whole plant community is performed through a few special stages.

The meaning of the word nudation is that the upper part of the earth’s surface is removed by weathering and the lower part is exposed. The process of the creation of non-existent barren land is called nudation. Nudation here refers to an open space without plants. There are many causes of nudation. Such as-

Biotic factors or man-made factors are considered to be responsible for the destruction of forests for industry, agriculture, and housing. Besides, there are some other biotic factors that destroy existing plant populations. These are diseases, fungal epidemics, viruses, etc.

In this method, a plant species establishes itself on open land with great success. In fact, that species came from another region and settled in the present region. Invasion is the successful establishment of a species in an exposed or barren area. The entire invasion process is done in the following three levels.

The seeds, pollen, or any other organ of a species first appear in that open space and this migration is possible mainly by air, water, or other factors.

After arriving in the new area, the species began to adapt to the natural environment there. During this adaptation, some species were removed due to the inability to adapt. The remaining species establish themselves firmly. In this process, different types of plants are developed.

The species is firmly established in the new territory and continues to increase their number. The result is the creation of a large densely enclosed plant community. After this process, plants do reproduction.

The intense struggle for habitat and nutrition is seen only when the total number of the same or different species increases in a small area. This struggle starts between two different species or the same species. Struggle between similar species has led to the extinction of some plant species. Then it is called coaction or competition. The competition begins with the relationship of plants with the environment. This interaction with the environment is organized in two ways.

This is an important stage of succession. The reaction is a method where the environment is changed by the effect of organic matter. As a result of this reaction, the water, temperature, light, etc. change in the environment. At that moment the species cannot adapt easily to the changing environment. In this situation, another new species takes the place of the existing one. The reason is that the new species is able to adapt to the environment.

Plant succession is very important for the environment and ecology. Properly reviewing the different stages of plant succession in a region makes it possible to determine the duration of the ecosystem’s existence (1) & (2).

What is plant succession?

How to succession plants?

There are two ways that can approach the succession of plants. The first is to focus on growing a single plant in a certain area. And second is to transplant several complementary plant communities in the same area.

What is plant succession in geography?

In geographical terms, plant succession is a natural process by which another new plant species builds its own habitat in the same habitat.

How would the addition of a plant in which nitrogen fixation occurs alter succession?