The materials of the crust or lithosphere are known as rocks. Rock is a combination of naturally occurring solids or minerals. The rocks are classified based on different types of mineral composition and the formation method. Below is a discussion of rocks and their types.

The crust is the outer part of the rock. The depth of the crust is not the same everywhere, its average depth inside the continent is about 40-50 km and inside the ocean is about 5-10 km.

According to geologists, rocks are formed by the combination of two or more minerals. Rocks are formed naturally. But each type of rock has unique properties. There are mainly three types of rocks. These are igneous rock, sedimentary rock, and metamorphic rock. The characteristics of rocks and their classification are discussed in detail here (1) & (3).

The crust is made up of rocks which are again composed of different types of minerals. These minerals are mainly composed of crystalline solids which are formed as a result of the regular arrangement of chemical compounds. Minerals that form rocks are joined together by chemical bonds. The type and presence of minerals in the rock indicate where and how the rock was formed.

Some rocks may be composed of a single mineral. In this case, minerals and rocks are the same substance. For example, Calcite is a mineral and limestone. Rocks that are composed of more than one mineral are called heterogeneous rocks and rocks that are made of a single mineral are called homogeneous rocks. The major minerals that makeup rock are feldspar, olivine, pyroxene, calcite, dolomite, quartz, clay, gypsum, etc. (1)

Rocks are either composed of a single mineral or a mixture of several minerals that make up an essential part of the earth. It is a homogeneous or heterogeneous mixture of one or more minerals found in nature (2).

All rocks are not the same. Some rocks are fragile, some are strong and corrosive, some are layered, and some are massive. According to the method of origin, rocks are divided into three main categories. These are as follows. 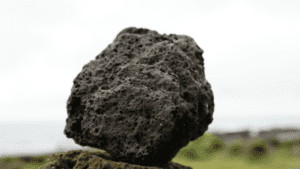 The word igneous has been derived from the Latin word ‘ignis’ meaning thereby fire. It does not mean that the origin of igneous rock is associated with fire in any way (1).

This rock is called igneous rock because it is formed by the solidification of heated elements or magma. Igneous rock was first formed on the surface of the earth and this rock did not originate from any other rock, so it is called primary rock or primitive rock (1).

The main features of igneous rocks are

According to the origin, igneous rocks are divided into two categories.

a. Extrusive or volcanic rock

During an eruption or through a crack, magma rises to the earth’s surface and flows as lava. When this lava comes in contact with a cold area, it quickly solidifies and turns into solid rock. Such rocks are called extrusive igneous rocks. The grains of this rock is very fine and the color is very dark.

Basalt rock is an igneous rock. It can be seen along the tram or train line. The hills of the Rajmahal in west Bengal are made of basalt.

Based on the origin, extrusive rocks can be divided into two categories.

The rock that is formed when the lava of the volcano cools and solidifies is called lava rock. Most of the extrusive rocks are lava rocks. Basalt is lava rock.

During a volcanic eruption, lava that has already accumulated in the mouth of a volcano or magma channel breaks out into ash, cinder, and small fragments, then they are called pyroclastic rocks. Volcanic tuff is a pyroclastic rock.

The hot molten material or magma of the earth’s core often does not reach the earth’s surface and gradually cools inside the interior part of the earth for many years and turns into solid rocks. This rock is known as intrusive rock.

Magma slowly cools by radiating heat and congeals to form this type of igneous rock. The grains of this rock is coarse because it gradually solidifies and the color of the rock is lighter.

Based on their chemical composition, igneous rocks are classified into four categories.

The amount of alkaline oxides in these rocks is very low and the amount of silica or sand is very high. They carry silica content between 65 to 85%. Acidic igneous rocks lack iron and magnesium. The average density varies from 2.7 to 2.8. These rocks are light and less corrosive. So they are used as building materials.

These rocks contain low amounts of both alkaline oxides and silica. The amount of silica in intermediate rocks is less than the amount present in acidic rocks but higher than in basic rocks. Diorite and andesite are examples of intermediate rocks.

They carry silica content between 45 to 60%. The average density of basic rock ranges from 2.8 to 3.0. These types of igneous rocks are rich in ferro-magnesium minerals. The amount of feldspar in these rocks is very low. These rocks are fine-grained igneous rocks.

These types of igneous rock carry silica content less than 45%. Their average density is about 2.8 to 3.4. Such rocks contain high amounts of alkaline oxides. Peridotite is an example of ultra-basic rock (1) & (2). 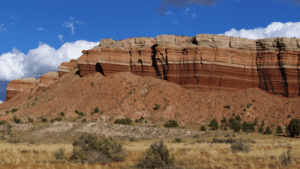 The rock formed by the accumulation of sediment is called sedimentary rock. The igneous rock is gradually eroded by rivers, glaciers, wind, etc. These eroded rocks are deposited at the bottom of seas, lakes, or rivers.

This is how the eroded elements accumulate in layers year after year and the rock that forms under the internal heat and pressure is called sedimentary rock (2).

1. Sedimentary rock is called stratified rock because it accumulates in layers.

2. Fossils are found in these rocks.

3. These rocks are quite soft and light.

4. Sedimentary rocks do not have crystals like igneous rocks.

6. The grains of this rock are lightly organized.

7. They are found in coal, mineral oil, and natural gas.

8. Its hardness is less than igneous rocks.

9. There is no formation of cracks or crystals in these rocks.

According to the origin and structure, sedimentary rocks are mainly divided into three categories.

a. A sedimentary rock formed mechanically

b. A sedimentary rock formed by chemically

Dolomite, gypsum, limonite, etc. are these types of sedimentary rocks.

There are also two types of sedimentary rocks, based on the origin of silt 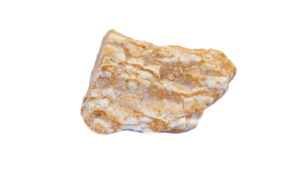 Influenced by various natural forces, the sedimentary rock formed by the erosion of primary igneous rock is called clastic rock. Such as sandstone, conglomerate, mudstone, etc.

The word Metamorphic has been derived from the word ‘metamorphose’, which means ‘change in form’ (1).

Various igneous rocks and sedimentary rocks are often transformed into a new type of rock by extreme pressure, heat, or chemical processes. This type of rock is called metamorphic rock because it is formed through change and transformation.

According to P. G. Worcester, “Metamorphic rocks include rocks which have been changed either in form or composition without any disintegration” (1).

1. The hardness of the metamorphic rock is much higher. After the rock is transformed, the minerals that make up the rock become denser. As a result, the previous rock becomes harder and its erosion capacity increases.

2. It erodes more slowly than igneous and sedimentary rocks.

3. During the transformation, the minerals are rearranged and often move to one side. For this purpose, various types of minerals are found in metamorphic rock.

4. This rock is unstratified rock.

5. These rocks do not contain fossils. During the transformation, fossils in the rock layer are destroyed by the effects of extreme heat and pressure.

Metamorphic rock can be classified into two types.

Gneiss is formed from granite.

Slate is formed from mudstone.

1. The effect of heat

The effect of heat is to create metamorphic rocks in contact with heated liquid magma. Gneiss is created from granite.

Metamorphic rocks are formed under the pressure produced by the effect of pressure. Slate is formed by transforming mudstone.

3. The combined effect of heat and pressure

Geologists believe that rock is also transformed by reaction with groundwater or gas (1) & (2).