Geomorphic process is a process that describes how different landforms on earth are formed. It changes the configuration of the earth’s surface, which is caused by physical and chemical action on the materials present in the earth. Below is a discussion of the definition and types of geomorphic processes.

The topography of the land and seafloor of the earth is varied. All the landforms of land and water bodies change with time. Today’s plains may have been parts of oceans or mountains in the past. That is why the remains or fossils of marine animals are observed in the peaks of the Himalayas, Rocky, and Andes mountains.

Moreover, by analyzing the rocks and soil of these mountains, scientists have found that the mountains are formed from the sea floor. That is to say, over the ages, mountains, plains, plateaus, etc. have been raised under the influence of the orogenic movement. The process by which this uplift occurs is called the geomorphic process (1) & (3).

The processes by which landforms change and evolve through physical and chemical changes are called geomorphic processes (3).

The surface of the earth is constantly changing. The energy required to change the surface changes either slowly or abruptly or both. That is, the geomorphic process is mainly divided into 2 types. Namely endogenic and exogenic processes. Their different types are described below. 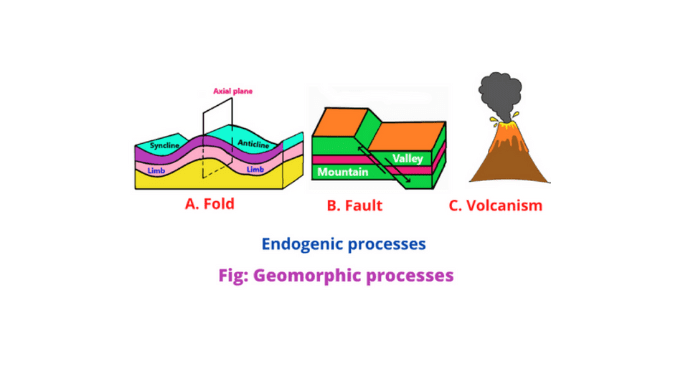 Endogenic processes are the changes in landforms that occur through contraction, expansion, uplift, subsidence, etc. of the earth’s core under the influence of convection currents generated in the atmosphere (1) & (5).

1. Endogenic processes are the mechanism by which internal geologic forces act to form primary landforms.

2. The force which is involved in this process is caused by changes in the physical and chemical properties of the elastic material within the inner sphere.

3. These processes act on the crust both suddenly and slowly over long periods of time.

4. In this process, the relative movement of the crust occurs and the main landforms that form are continents and oceans or mountains, plateaus, and plains.

6. This process plays an important role in maintaining other structural features of the earth’s crust (3) & (5).

There are two types of endogenic processes. These are as follows

1. Diastrophism is a type of earth movement that occurs slowly.

2. It acts under the crust for thousands or millions of years.

4. The intensity of such earth’s movement is low.

5. Diastrophism cannot be measured with instruments.

6. It is a type of earth’s movement of deformation of the earth’s crust that involves folding and faulting.

7. Vertical and horizontal movement of the land occurs in this earth movement.

8. It cannot be felt all the time.

9. This type of earth‘s movement covers the movement of solid crust material.

10. It is considered a part of Geotectonics.

11. As a result of diastrophism different parts of the crust change, evolve and new landforms are formed (2) & (3).

Types of Slow movement or diastrophism

Upward movement is a type of movement that occurs when a continent or a coastal region gradually rises upwards under the influence of a heavy epeirogenic movement (1).

Downward movement or submergence occurs when a continent or a coastal region gradually moves downward under the influence of a heavy epeirogenic movement (1).

As a result of the earth’s movement, the rock layers are folded and Fold Mountains are formed, and when the compressive force is strong, faults are created, it is called orogenic movement. This type of movement works horizontally on the surface, so it is also called horizontal movement. In fact, it is tangential to the elliptical surface of the earth (3).

Orogenic movement acts horizontally or tangentially on the surface. As a result of this movement, two land areas move towards each other (convergence) and somewhere they move in opposite directions (divergence).

1. Orogenic movement takes place over a wide and vast area.

2. Horizontal displacement of the crust occurs in this earth’s movement.

3. In the orogenic movement, the force acts horizontally along the tangent.

4. Such earth’s movement results in the compression of rocks and folds.

5. Fold Mountains are formed as a result of orogenic movement.

6. Formation of folds in the crust due to the effects of this earth’s movement.

7. This type of earth movement occurs along the tangent of the earth.

8. Here the forces act horizontally towards each other.

9. This earth’s movement impact only resulted in the emergence of the Fold Mountains. However, due to extreme pressure, many thrusts were created throughout the hilly areas (3) & (4).

Causes of orogenic movement are

Sudden movement is when suddenly movement occurs far below the crust under the influence of internal forces.

1. The earth movement that occurs suddenly or momentarily under the influence of internal forces is called sudden movement.

2. This earth movement is temporary, there is no fixed time limit. The UNA usually acts vertically on this stirring surface.

3. The energy and earth movement can be measured with the help of sensitive and delicate instruments.

4. Although predominantly destructive, this force has little effect on surface modification.

5. Due to the impact of the eruption, different types of volcanic eruptions inside the earth, landforms like volcanoes, caldera, etc. on the surface, and due to earthquakes, various types of landforms change.

Volcanism is the special mechanism by which hot molten material or magma is released to the surface through a crack or hole in the crust. As a result of this volcanism, the dyke, lopolith, laccolith, sill, sheet, etc. are formed in the rock layers and volcanic mountains, volcanoes, etc. are formed on the earth’s surface (3).

Earth’s hard crust shakes suddenly for some time as a result of any disturbance in the earth’s interior. Such natural phenomena are called earthquakes.

Earthquakes usually last from a few seconds to 1/2 minutes. But some earthquakes last as long as 8 to 10 minutes. The powerful earthquake caused extensive damage to houses and property and many lives were lost. As a result of these earthquakes, faults, folds, lakes, joints, etc. are formed in the earth’s surface (3). 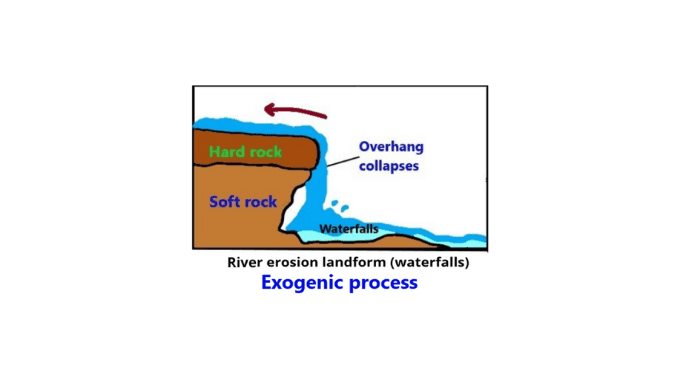 The processes by which erosion, transport, and deposition occur at the surface. As a result, different types of landforms are formed on the earth’s surface called exogenic processes (1) & (6).

2. This process gets energy from the slope of the land which is created by geological processes (slope of gradient).

3. The energy which is required for these processes comes from the atmosphere and the sun.

5. Exogenic processes refer to all the processes that are occurring at the earth’s surface.

Weathering is a natural process. This is the pre-formation process for soil formation. Through this process, the rock is broken into small pieces or crushed rock. The crust is made up of different rocks.

Weathering is the breaking or separation of rocks from the same place in different natural processes and chemical reactions under the influence of different elements of weather (3).

Erosion is the process by which rock layers are broken down and moved by rivers, glaciers, wind currents, ocean waves, etc. (1).

A deposition is an exogenic process where the sediments are carried out by wind, glaciers, groundwater, river, etc. (1).

1. Avalanches are what type of geomorphic process?

Avalanches are a type of exogenic geomorphic process.

2. What is geomorphic process?

All the natural and chemical processes that cause change and evolution of the earth’s surface are called geomorphic processes.

3. Which process is an internal geomorphic process?

The endogenic process is an internal geomorphic process.

4. The primary geomorphic processes at work on the landforms of the Atlantic periphery are what?

Glaciation is the primary geomorphic process at work on the landforms of the Atlantic periphery.

5. Which of the following is not an external geomorphic process?

Diastrophism is not an external geomorphic process.