About 40 types of basic elements are needed to sustain life on earth and among these, there are 6 elements that lay a vital role in sustaining the life of an organism. These 6 elements are carbon, hydrogen, oxygen, nitrogen, phosphorus, and sulfur. The most essential elements are carbon, oxygen, and nitrogen and play a significant role in the formation of cells in the body, in the regulation of various physiological activities. These elements continuously used and released in the environment thus forming a biogeochemical cycle. The biogeochemical cycle is an essential cycle for all life on earth. Through the biogeochemical cycle, all the elements enter the organism’s body from the natural environment and return to the natural environment from the organisms. One such cyclic process is the nitrogen cycle and is discussed as below (2) & (3).

The nitrogen cycle is one of the most important biogeochemical cycles as it is the most essential element for all organisms. In this cycle, nitrogen is converted in various ways through biological and physical processes.

Definition of the nitrogen cycle

The cyclic process by which nitrogen as in the atmosphere is transmitted from air to soil, from soil to plants, from plants to animals, and finally from organisms to the atmosphere and maintains the balance of nitrogen in the environment is called the nitrogen cycle (3).

The nitrogen cycle in detail 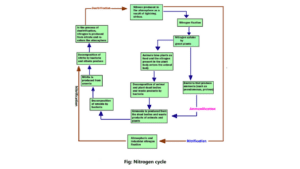 The nitrogen cycle is completed in several stages.

The interaction of nitrogen, hydrogen, and oxygen in the atmosphere requires a lot of energy. The main source of this energy is cosmic radiation, the inherent energy of meteorites, lightning, etc.

The process of nitrogen fixation in the physical method is shown below.

Various soil microorganisms have a significant role to play in fixing atmospheric nitrogen in a natural way. Different types of microorganisms participate in this process. Such as-

Nitrogen-type inorganic fertilizers are also applied to the soil to increase the fertility of the soil. As a result, the amount of nitrogen in the soil increases (3) & (6).

Amino acid and urea present in the carcasses of plants and animals are re-converted into ammonia and ammonium salts by the analysis of various bacteria and fungi. The process of conversion from amino acids to ammonia is called ammonification. Some bacteria like pseudomonas, proteus, etc. play a major role in this process. These are called ammonifying bacteria (2) & (7).

The ammonia or ammonium salt produced in the ammonification is converted to nitrate by the action of various bacteria. This process is called nitrification. Nitrification occurs in two steps.

Denitrifying bacteria such as pseudomonas, thiobacillus, micrococcus, etc. participate in this process.

They decompose nitrates to produce gaseous nitrogen or various oxides of nitrogen and return nitrogen to the atmosphere.

Thus the nitrogen cycle is completed. Some amount of nitrate mixes with groundwater or flows into the sea through the river (3) & (4).

Effect of the environment and humans on the nitrogen cycle

The nitrogen cycle has a significant impact on the environment and fauna and plays a vital role in the ecosystem. From the above discussion, it is clear that the bacterial effect is present at each stage of the nitrogen cycle. Atmospheric nitrogen is stabilized in the soil by various bacteria and returns to the atmosphere. This cycle maintains the balance of nitrogen in the system of the earth and the biosphere (3).