The earth’s crust takes various forms due to its origins and various effects of corrosive forces as a result, different parts of the earth’s surface have different heights called landforms. There are many variations that can be observed on the surface of the earth. These variations were not present at the beginning of the creation of the earth. The earth was hot and gaseous when it was first created later, gradually cooled, creating continents and oceans. Between these two forms, various changes take place in the land at the bottom of the ocean and on the surface of the continent. According to the difference in land elevation of the continent, there are three types of topography. The mountain is one of these landforms. Below is a discussion of how mountains are formed (1) & (4).

What is a mountain?

A mountain is a landform on the surface of the earth that has the highest peak, extends far, high, and has steep slopes they are generally wide and rocky. The topmost, narrowest part of the mountain is called the mountain peak they are often covered with white snow. Many peaks are called mountain ranges when they cover a large valley (2).

The Himalayas of Asia, the Alps of Europe, the Andes of South America, etc. are examples of mountains (1).

The size and height of the mountains are the largest among the landforms of the earth’s surface. Therefore, geologists have always been curious to know the reason for mountain formation.

The combination of these two words has given rise to the word ‘Orogenesis’, which means the process of mountain formation. According to the origin and variety of structure, the mountains are mainly divided into four types. These are fold mountains, block mountains, volcanic mountains, and relict mountains. Below is a brief discussion of how all these mountains are formed (5).

The rock of the earth’s crust is arranged in layers. The mountain that is formed by folding in this rock layer is called Fold Mountain. The fold mountain is formed by many folds.

There are many peaks located in the fold mountains. The formation of fold mountain is not stable. Fossils can be seen in this mountain due to their origin from the sedimentary rocks of the sea (2) & (5).

The Himalayas of India, the Alps, and Jura of Europe, the Atlas of Africa, the Rocky of North America, etc. are examples of the Fold Mountains (1).

There are various theories about the cause of the formation of the Fold Mountains. The main two theories are

According to this theory- in ancient periods, there was a large hole in the area where now the Fold Mountains are located. In geological terms, the name of these large holes is geosyncline. Sediment accumulates over the year and as a result, this geosyncline is almost filled.

Continuous sedimentation causes downward and lateral pressure at ground level. And as a result, the accumulated silt of the geosyncline begins to fold. Later these folds became higher and formed the fold mountain.

According to the plate tectonic theory, the lithosphere consists of some plates. These plates are dynamic. They float on a very hot and liquid magma layer at the bottom of the mantle.

Each plate can consist of only continents or oceans or a combination of both such as the Eurasian plate, the African plate, the Indian plate, the pacific plate, etc. These plates become dynamic due to convection currents. 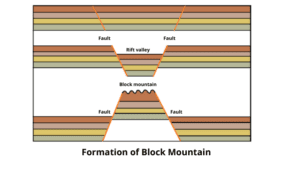 Earthquakes caused cracks or faults in the rock layer that further breaks down into blocks. The fragmented land between two parallel faults is often pushed down from below to form a mountain, thus forming a mountain called a block mountain.

Vindhya Range, Satpura range in India, black-forest in Germany, the Vosges mountain in France, etc. are examples of block mountains (5).

As a result of high pressure and low pressure, the surface between the two faults separates from the side and rises vertically along the line of fault. And the two surrounding parts are downward. As a result, the upward part of the ridge becomes a block mountain.

Sometimes a high pressure on the surface rock layer causes the middle part of two parallel faults to form a rift valley. Then the steep part of the valley on both sides became the shape of block mountains. The Block Mountains formed by the rise of the part between the two parallel faults is called the horst (6) & (7). 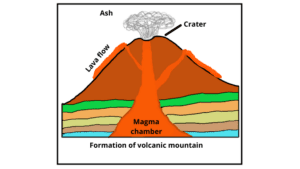 The hot molten rock or magma comes out of the earth’s crust through the cracks of the surface. When the magma cools and hardens, it forms a dome-shaped or cone-shaped mountain, called the volcanic mountain.

Vesuvius of Italy, Fujiyama or Mount Fuji of Japan, Kilimanjaro of Africa, etc. are examples of volcanic mountains (2).

This heat melts the various substances in the interior of the earth to form liquid rock or magma. Under extreme pressure, the superheated liquid magma rises to the surface through cracks in the crust and spreads as lava through a crater at the top of the volcano. 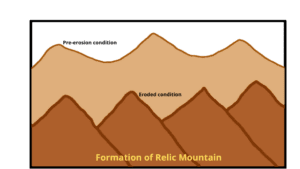 On the other hand, solid rocks prevent corrosion as a result the soft rocky part goes down and the hard rocky part rises and takes on the shape of a mountain.

The relict mountains are formed in two ways.

Due to weathering, the surface of the earth is gradually eroded. For the heterogeneous structure of rocks, the part formed by hard rocks is less eroded and the surrounding part is more eroded due to soft rock.

This causes the less eroded part to become detached from the more eroded part, creating relict mountains. Mount Aravalli is a very ancient fold mountain. It has been eroded for centuries and is now a relict mountain (2) & (7).